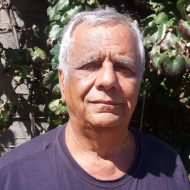 Here you enter a sort text or nothing at all...

This user account status is Approved
About About
Posts Posts

This user has not added any information to their profile yet.

I am Dimitri Favvas, an expert by my own definition in measuring large components, a subject that I will elaborate further in “specialties”
Graduated from a school of merchant navy engineering (ΑΣΜΕΝ) in 1959 in Greece, and attended some further courses leading to no degree (Sir George Williams University and Dawson College) in Montreal in the 70s.

Due to circumstances I never worked at sea, spending instead my lifetime working in industrial installations and large metal fabrications around the world, fulfilling thus my desire to discover the unknown (to me) and meet and work with different people.
In 1960 I emigrated to Brazil and in 1963 to Canada where I still live.
My last employer was G.E.CANADA where I spent 30 years dealing mainly with large components in the departments of Paper Division initially, but mostly in the Mining and Hydraulic Turbine Divisions holding the positions of quality control inspector and technical director.
At times I was assigned to supervising and advising positions within Canada as well as the United States, Brazil, China and South Korea.

In dealing mainly with large components I had the opportunity to study some problems in depth, give solutions and sometimes initiate new ways to accurately measuring these components.
I strongly believe that machining and measuring large components mainly due to the weight, the flexibility of the metals, the temperature and the state and behaviour of large machines requires special attention and sometimes a different approach than the ordinary and small size components.
In 1985 I was awarded a U.S. and later a Canadian patent in measuring the taper on large shafts and hubs but due to barely recovering my expenses I did not followed up in requesting new patents.

I intend to elaborate further in the “specialities” section as to what are my observations, the problems and the solutions or possible solutions to some of them, hoping that someone out there will be interested in applying or trying my proposed solutions.
Being retired my objective is not mainly money but rather the satisfaction to see my ideas being applied.
Sometimes the solution is simple but a thought and a detail make the whole difference.