A little after midnight on the 11th of January 2018 we are landing in Quito. The lights of the city appear clearly below as there are not clouds at all. In the past, flying over the rocky mountains in Canada and seeing the top of the moutais over the clouds, I had the impression that never rains in the top of these mountains. It was however a wrong impression since in Quito at an altitude of 2850 meters there is vegetation and people live a normal life. I have found since that clouds may be formed up to the heights of 6000 meters except that the rainfall is diminishing as the height increases.

The name Ecuador is due to the equator that straddles the country. Before the invasion of the incas,other tribes lived in the area and the findings date back to 40000 years AD.  On the top of the mountain Catequilla (means “the follower of the moon”) are the ruins of a wall, it’s one side exactly on the equator, thought to be an observatory  of the stars built by the tribe of Quitu-cara some 800 years BC. Mor about it here 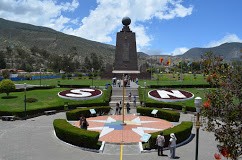 The line of the equator

Exactly on the line of the equator, an egg may stand up vertically on top of the head of a nail and the water drains straight down. On the northern hemisphere the water drains on a spiral motion from right to left while on the south from left to the right. I was aware of this due to my work with a hydraulic turbine fabricator. We were making turbines whose rotation was according to the hemisphere where they will be installed. More about it here. 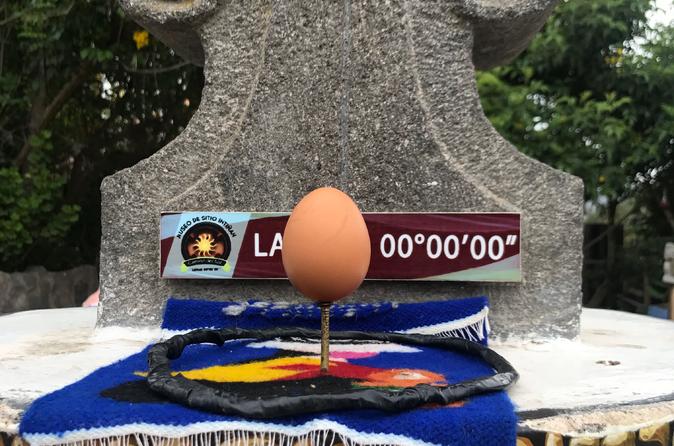 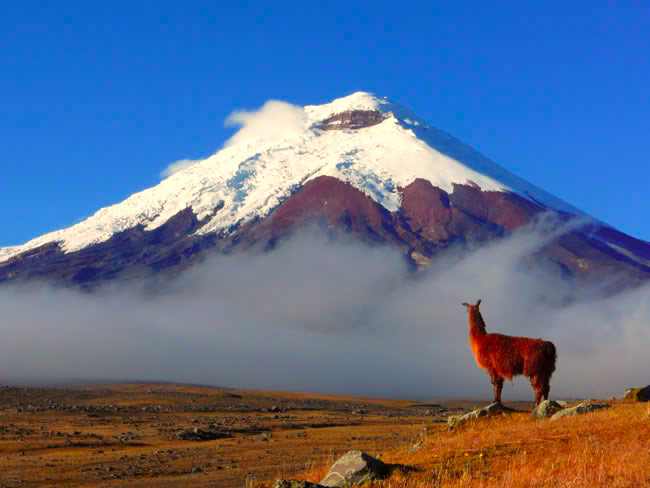 the top of Chimborazo mountain

The purpose of my trip: The unknown and it’s world have been the reasons of all my trips up to now. The fact that Raphael Correa, the ex-president of Ecuador has succeeded in diminishing the dept of the country has fueled my interest about it. Of course are also the islands of Galapagos where Darwin  has developed his theory of  biological evolution. An other reason at this time is to get away from the Canadian cold and to investigate the conditions of a future temporary or permanent stay.

After a five hour waiting time we board an AVIACA flight to Manta, our final destination and the sea. Manta is the largest city of the province of Manabi with a population of 218000 inhabitants. The plane leaves before schedule a fact that repeats also during our return. I guess that after all passengers have boarded, there is no reason in waiting. The plane  flies over the top of the mountains giving the feeling that it is about to touch them. I have been informed that in these altitudes, landing and take off becomes more difficult. 35 minutes later we land at the airport Eloy Alfaro, in Manta. A landing camp and a small building, this is the airport. 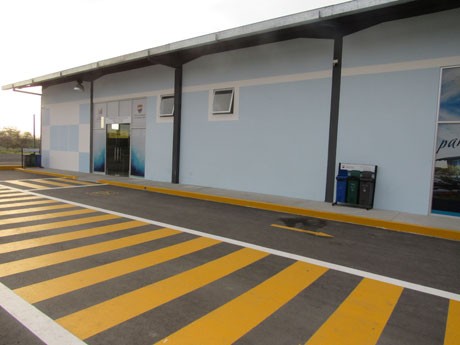 Eloy Alfaro the airport of Manta

11th Avenue between 14 and 15 streets I tell the taxi driver. We have reserved an apartment thru airbnb. There are no numbers on the houses but I have a picture of the apartment in order to recognize it. The taxi has no meter but the price of 10 US dollars seems reasonable. US dollar is the official currency here. The apartment is on the ground floor with steel bars at the entrance.

The first night we had dinner in Manta with an American couple who are real estate agents. We learned a lot about prices of real estate and the procedures of acquisition of real estate by non residents. We want to investigate this possibility since if affordable and secure we may decide to  buy something here.

The next morning we walked to the shopping mall”Pacifico” the desire of every woman to walk around the stores. We found that almost everything is imported and the prices are equivalent to those of north America. The wife did not buy anything and I bought a telephone since the one I have from Greece does not support the local band. Lunch at the mall and for supper we bought a pizza to eat in our apartment. In Ecuador  if you take a pizza home you pay for the price of the box into which the pizza is carried. In our case was 50 cents.

Our destination is the sea. We could walk to the beach from our apartment in Manta but unless one lives by the beach it is not practical to go swimming because there is no place to leave your clothes. Besides we did not see anybody swimming. That night we booked a room at a simple hotel, “HOSTAL CRUZITA” in Crucita, about 46 km from Manta for 30 dollars a nigh. A taxi without a meter took us there for 25 dollars. The taxi driver told us that they are about to implement the taxi meters. Crucita is a fishing village of 14000 people and with some tourism activities during the high seasons (carnaval and during school holidays). 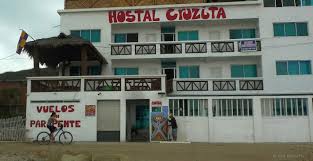 It is also a popular spot for paragliding due to the constant wind. Our room is facing the sea. walking out of the hotel you  cross an unpaved road and you are at the beach. Raul, the owner speaks perfect English and is also an instructor in paragliding. There is a constant breeze, day and night and perhaps this is the reason we notice no mosquitos and no flies. 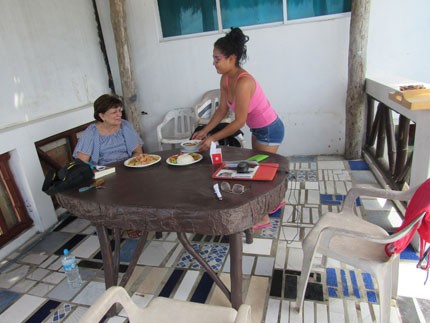 We crossed the road and walked to the beach we left two pairs of slippers, two t-shirts and a towel by the beach, there were no other people around and we went for a walk that lasted about 3/4 of an hour. On the way back. all our belongings were gone. The earthquake that happened in 2016 was very catastrophic according to Raul. People lost their houses, their belongings, their jobs and are trying to survive even by stealing. The earthquake had a magnitude of 7.8 on the Righter scale and Manabi, the province suffered 676 deaths officially and according to Raul 780, one of them in Crucita. 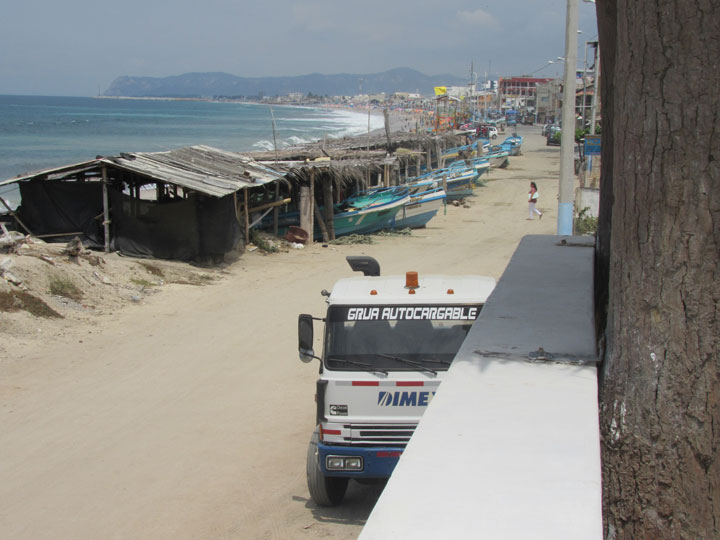 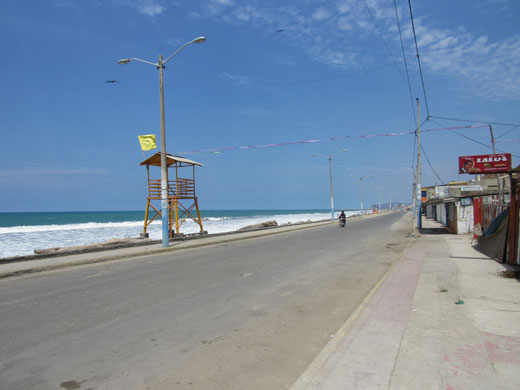 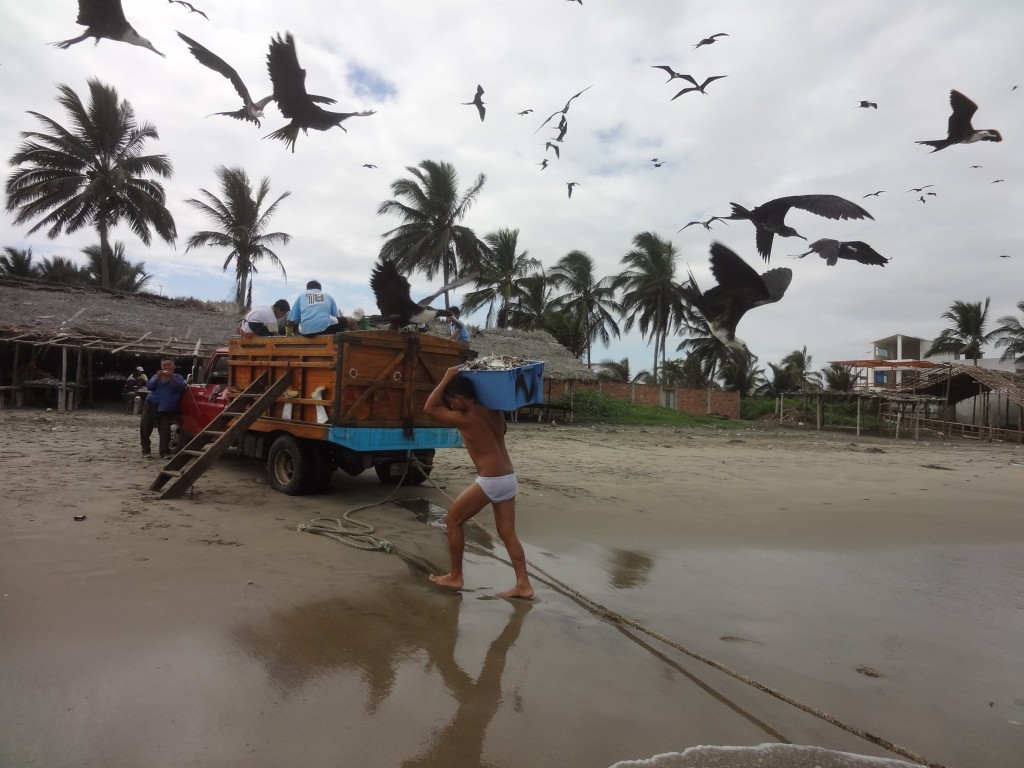 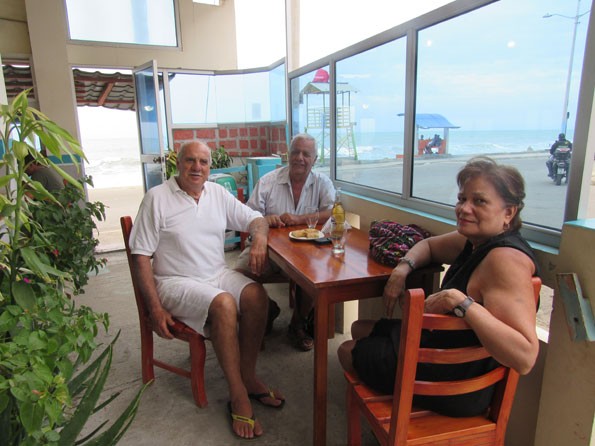 Outside our room is a table made out of a trunk of a tree and it’s legs from bamboo. We may be served lunch or supper there if we choose. A short distance to the right, facing the sea are  the fishing barracks. Here the fishermen keep their boats and also transport their catch where they unload it my mechanical means. At the other end of the city there are more fishermen and I have seen there smaller fish. Crucita lays along the beach, a strip of about 5 km in length with very little width. Near the fishing barracks there are establishments selling fillet of fish. When a boat is loaded with fish is pulled by the means of a rope tighten on a vertically rotated post up to the barracks for unloading. On the first day I went swimming across the hotel. I went a little further from the beach  to swim in more clear waters. I have had returned to the starting point without incident. On the second day there was a strong current with direction parallel to the shore. By the time I had succeeded in getting out I had my legs scratched and bleeding being unable to avoid some underwater rocks, where the current was taking me to. I was told that two tourists  have lost their lives in the area due to the current and the waves pushing them against the rocks and killing  them. I know from experience that currents are not on the same spot at all times. Then I tried for a third time at a location near the center of the beach where the water was clear up to the end. The current was so strong that I could feel the sand moving under my feet. At no time, I found myself a couple of hundred meters from the starting point but close to the shore. I have also noticed that although there are many lifeguard posts along the beach, there were no lifeguards. Perhaps being a low season the lifeguards if any were walking along the shore, supervising thus a greater area. What drew my attention were the red  flags on every lifeguard post I thought that could mean, not safe to swim. I have checked some of my previous pictures and the flags were yellow. There are gaviotas in large numbers. (I guess they are family of sea-gals) flying over the fish barracks, the town and the sea. They are of different colors and species some times flying high in line like the cranes other times scattered in the sky and other times diving one after the other on the waves before they brake, near the shore. There is plenty of fish for the gaviotas and for the people. A plate of fish at the restaurant costs between 5 and 8 dollars without bread. I think they are using bananas plantas compressed and cooked instead of bread. Sometimes we go for pizza. Enrico Maximo owns the  Génoa  pizza Genoveses make pizza with thin doe while his friend, a few blocks down the road, from Napoli, makes it with thick doe. What brought you here Enrico? It is the fault of the woman,  he jokes. We became friends with Enrico and Norma and they helped us in many ways while there. Norma is Ecuadorian born in Guayaquil. There is no taxi stand in the whole town. There are some tricycles instead that transport the people within the town limits but the are not equipped or permitted to make out of town trips

with the school bus to the airport.

Foreigners in Ecuador. There are thousands of foreigners in Ecuador, mainly Americans, Canadians and Europeans many of them come here to retire as the cost of living is affordable in comparison with other places, because of the clima and the relatively low rate of criminality. The rate of criminality is measured by the number of intentional murders per 100000 of population. As an example statistically Greece has an index of 0.85, Canada 1.68, United States 4.88 Brazil 27 and Ecuador 8.28. In some other countries the index ls over 65. The clima varies thru the country. I can only speak of Crucita where I passed most of my time in this trip. At least for the time  i stayed there it was mostly clouded with almost no rain, a pleasant breeze day and night, temperatures no more than 30 centigrades during the day and no less than 20 during the night. For our departure we had arranged with Raul to drive us to the airport. A last minute emergency where Raul went to Quito left us with a search for other options. Enrico came again with a solution and we were taken to the airport on a school bus.

We liked the place, we enjoyed our stay and we have decided to come back. There is a lot to be seen and the idea of buying an apartment here for a prolonged stay is still alive.